Yes, the service called "Apple Music" encompass many disparate features but by jamming everything into a single app Apple has managed to create a confusing mess.  While Apple will have its defenders, claiming that the interface isn't "that complicated," my real world observation of people who are not CPU designers or app developers, struggling to figure out how to use the Music app on iOS, is anecdotal evidence to the contrary.


Putting aside the on-boarding experience which is a pile of fail on its own, actually using Apple Music is an exercise in guesswork with bursts of occasional frustration.

Let's start with the interface for indicating musical preferences.  This is directly lifted from the Beats app: 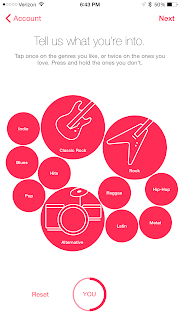 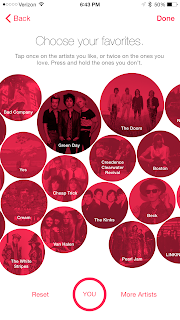 First, although the bubbles are playful, they bounce around and crowd each other out of view when you are trying to interact with them.  The physics may be fun, but it doesn't make for the most useable interface.  Also, the music categories are somewhat unhelpful. What's the difference between "hits" and "pop?"  And "classic rock" vs. "rock?"  A much more useful interface would simply be a list of categories, each with a list of example artists. For each there could be 3 or 4 buttons: No opinion, I dislike it, I like it, I love it.  Or something to that effect.

It gets even worse on the artists screen (above right).  I would much prefer just entering the names of artists I like, or having it ask me about artists in each category by providing me a list, or, even better, have it look at my existing library to get a list to ask me about.  The list of artists is sparse, and requires numerous presses of "More Artists" to get a cross-section of artists if you have eclectic tastes.  And the bubble-physics problem becomes much worse given that the set of artists is larger than the set of categories.

Much has been said about the "tabs" in the new app: "For You," "New," "Radio," "Connect," "My Music."  I challenge anyone who has not seen the WWDC Keynote to figure out what these tabs do without having to poke around. 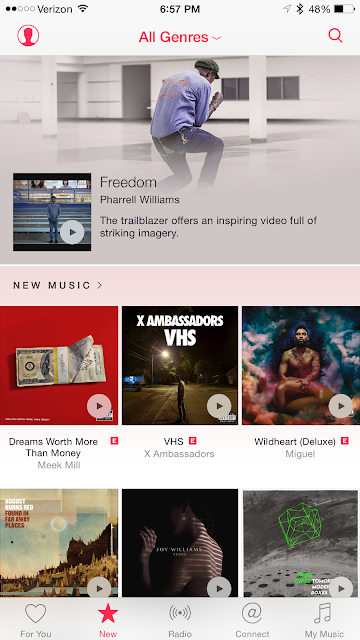 "New" is particularly egregious. I still don't know what this means.  If anything, it seems more like "Explore": a place to go to see music that Apple is promoting either because it's new, popular, or otherwise interesting.  Although the top shows "NEW MUSIC," as you scroll down there are different categories: "RECENT RELEASES," "TOP SONGS," "HOT ALBUM," and "DISCOVERED ON CONNECT: AUDIO."  Below that are links to "APPLE MUSIC EDITORS," "ACTIVITIES," and "CURATORS." Then various other things including "SUMMERTIME PLAYLISTS," "NEW ARTISTS," "SPOTLIGHT ON SIA," etc.

It's a mishmash of curation. It's 6 ½ pages long.  "New" is a horrible name for it.  What's worse, is that despite Apple's emphasis on personalization, the contents of the "New" tab, at least for me, seem to bear little resemblance to anything I listen to.  At the top is the "All Genres" pull down - activating it lists a series of musical genres: 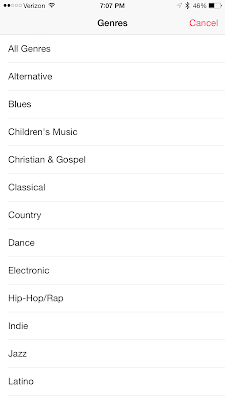 This time no bubbles. And the list of genres does not match the set of bubbles we started with.  And wouldn't it make sense to have the default be to focus on the genres that I have interest in?

As long as we are talking genres: 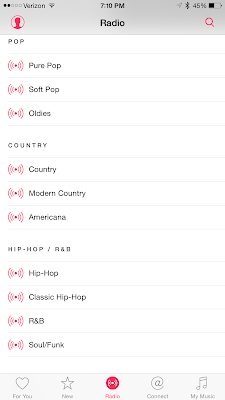 Now assume you've searched "Apple Music" and have clicked on a result to play it:

Now we have two pause/play controls, one covering the album art thumbnail and the other in the mini-player bar at the bottom.

It turns out if you tap the mini-player, or drag it upward, you get the full player.  This is not obvious to casual users - my wife asked me how to get rid of the mini-player since she didn't understand what it was for.  The mini-player is, in principal, an improvement over the ubiquitous "now playing" link in the old Music.app, but as implemented it provides insufficient visual clues as to its purpose and operation.

The many "..." buttons also provide a source of confusion: 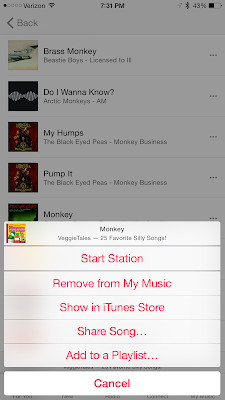 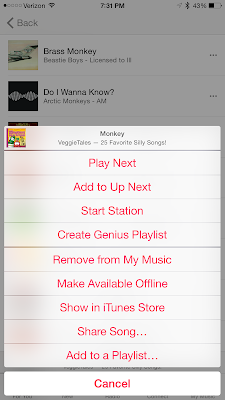 Can you guess which is which? The give away is "play next" and "add to up next": these would make no sense for the currently playing song.

But let's consider these menus in more detail.  What does "Start Station" mean? Is that a reference to "Radio?" Why not say so? What does "Remove from My Music" do? That sounds dangerous.  What's the difference between "Play Next" and "Add to Up Next?"  Does the latter mean "add to the queue?" If so, why not say so?

If I had picked a song not in my library, instead of "remove from my music" I would have an "Add to My Music" choice.  But how does that differ from "Make Available Offline?" If I add to my music, does that mean it gets added to my library but the song isn't physically downloaded onto the device? Do I really need that level of granularity? Why not just always download onto the device and if I need room later I can remove it?

And there has to be a better way of indicating all these choices than a wall of text.

In any event, to be clear, while I understand what is going on here, I think newbies and casual users will be turned off by all of this visual clutter and inconsistency.  I'll follow up with additional observations and thoughts once I've had more time to live with the app, and also report on iTunes 12.2 on Mac.
at 7:40 PM