Why Macs will Get ARM'd - Interstitial 1 - The A8 Datapoint

Marco Arment is concerned that the benchmark results for the A8 may mean the era of rapid performance improvement in mobile is over.

He provides a graph, produced using data from GeekBench Browser, that looks something like this: 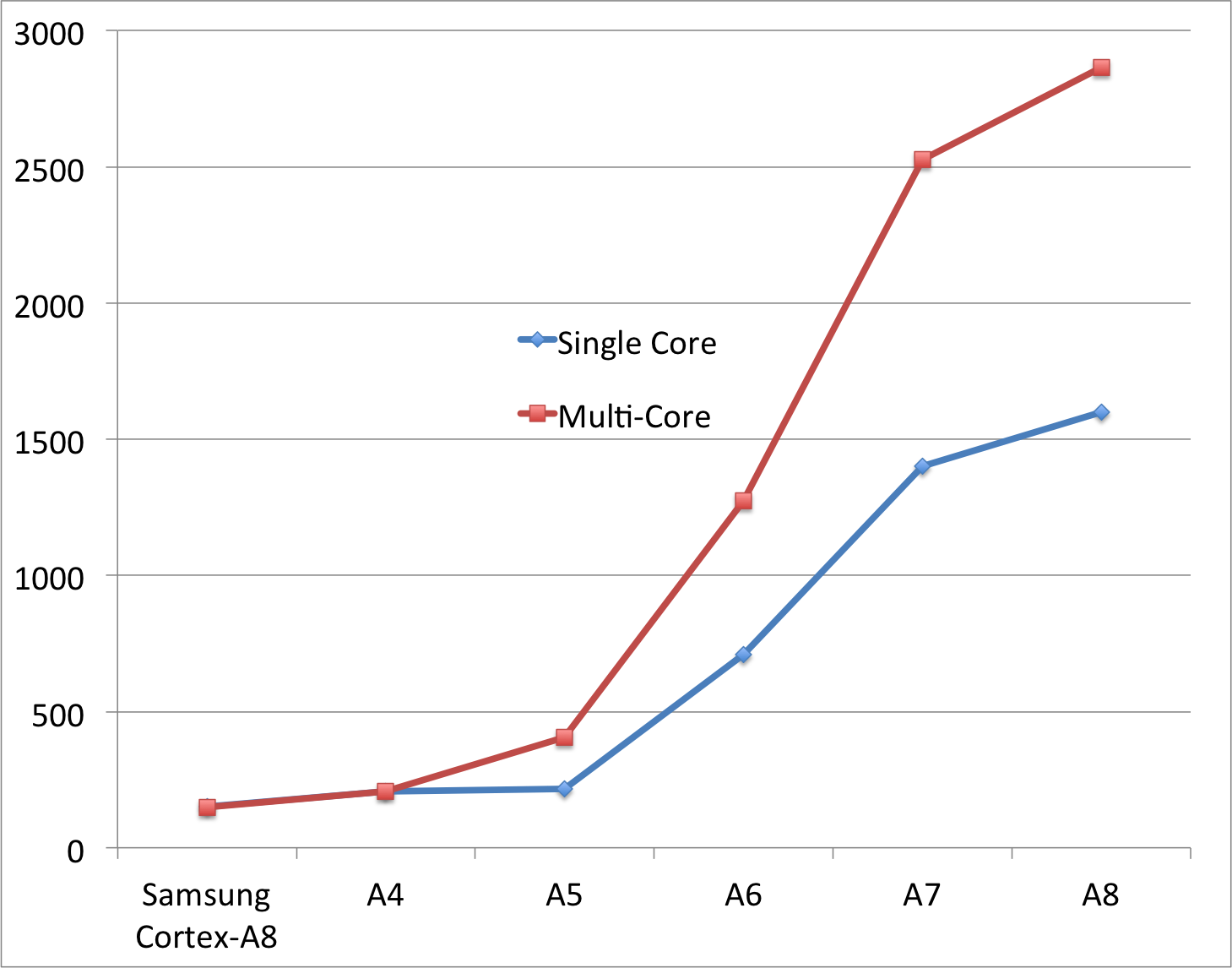 Now, even if we give a single benchmark undue weight as accurately indicative of overall performance, this is a bit misleading.  First, there is a lot of low-hanging fruit the designers of Apple's processors can pick when market conditions force them to.  One of the most obvious is adding more cores.  Even though adding more cores doesn't necessarily provide linear improvement, it's pretty linear up to around 6 or 8 cores.  So let's normalize the graph to emphasize performance per core to see how technology has advanced: 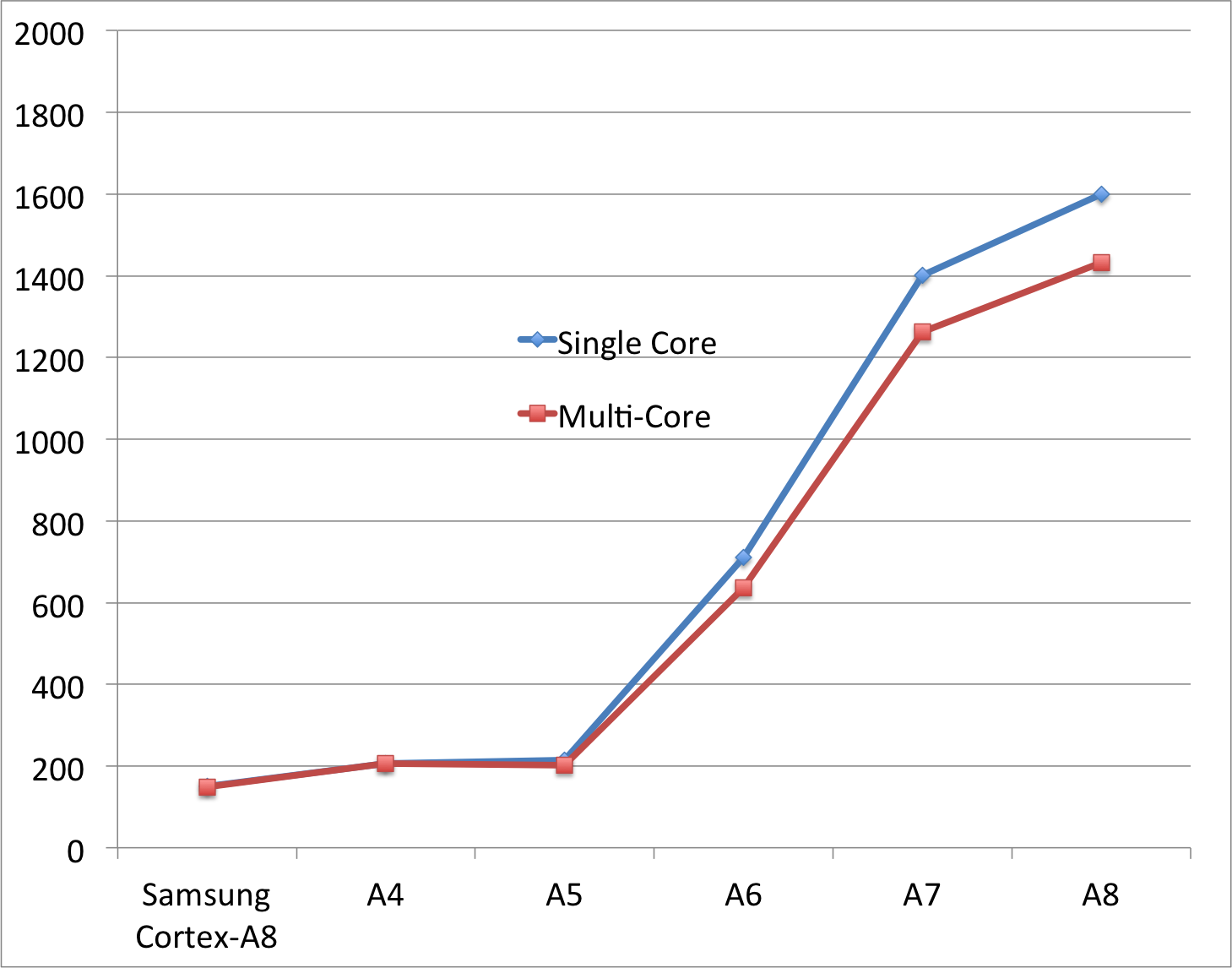 A bit of a drop-off in rate of improvement, but nothing to get too panicked about yet.

But what about clock speed? The designers may have chosen to simply clock at a lower rate so that the iPhone could be marketed as having better battery life this time around (which it does have).  If the battery life were reduced to iPhone 5S-like levels, presumably the chip could be clocked faster.

To get an understanding of this, let's look at performance per core per MHz: 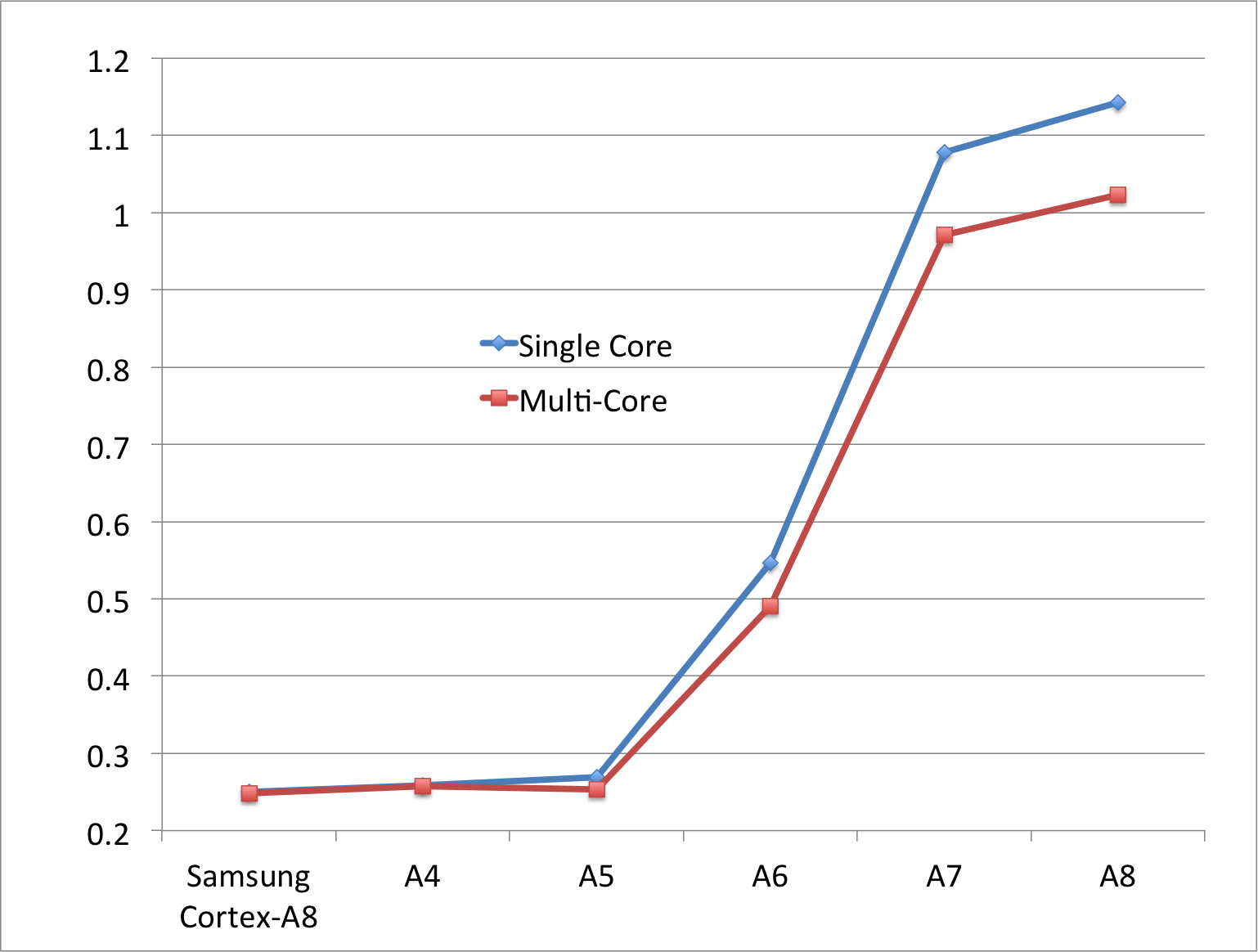 So what's going on here?  I think two things.

First, remember that unlike every prior iPhone chip, this one is fabbed not by Samsung but by TSMC.    I'm sure TSMC is doing a fine job, but there any time you switch fabs like that all the "design rules" change, which means your entire chip layout has to be redone.  This is a very intensive job, requiring the designers to almost start from scratch.

I suspect that a closer look at A8 would find that its cores are very similar to A7, with perhaps some bug fixes and fine tuning.  Some regular structures may have been increased in size (certainly have, based on the 2 billion transistor count), including things like caches and buffers.  This will cause a performance-per-clock cycle (or, as chip designers call it, an IPC) improvement, which meant that the performance improved both because of the 7.7% increase in clock speed and because the chip can do a little more work during each clock cycle (on average).  That, and a battery life improvement (due by decreased device leakage and lower capacitance to charge and discharge each cycle because of the smaller feature sizes) were probably "good enough" for Apple this time around, especially since (1) the A7 is still near the top of the pack in performance in the smartphone market and (2) Apple had some other big things to crow about in selling the iPhone 6 this time around.

Whether this is a one time thing or the beginning of an Intel-like "tick-tock" cycle is hard to say.  I assume A9 will be fabbed on TSMC's 16nm process (there are rumors to the contrary, however), so we could be looking at a one-time blip.  Or we may be at the end of the "free candy" stage where Apple's design magic (using the techniques used at high end microprocessor places like AMD and not the techniques used by most everyone else - ASIC  design methodology) can keep ratcheting up the heat on its competition.

I suspect, however, that we'll see A9 with around 10-15% per-core-per-clock improvement in performance, and with four cores.

As for what this means about a future laptop or desktop processor: not much.   The A-series have a very low thermal envelope and Apple's designers are much more constrained than they would be for a laptop processor.

For more analysis of the Mac's future on ARM, look over here.
at 1:32 PM